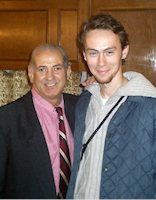 When he was young, he had a penchant for painting, wood carving, and musical instruments. At the age of 12 he started the art college in Sibiu, where he was also taught the panpipe. Over the next 7 years, Nechifor performed on various Romanian and foreign stages with his university folklore band Taraf and the Căluşerul Ensemble. His dedication to panpipes and folklore was partly inspired by Maestro Gheorghe Zamfir. Therefore, Radu was keen to study with Zamfir.

Fate wanted Radu to be one of the three students admitted to Zamfir’s Panpipe Class at the Bucharest Conservatory in 2003. The maestro led him on a hard but beautiful course, towards musical maturity and a thorough understanding of the secrets of the pan flute. Four years later, Zamfir wrote the following about Radu Nechifor: “I am happy to present such a talent and I am proud that the Romanian panpipe world has been enriched by such exceptional capacity.”

In 2006 Nechifor won the third prize on the occasion of the Mamaia Folklore Festival and the first prize at the Strugurele de Aur Festival.

In 2007 Nechifor put together a wonderful collection of Romanian folk songs and released them on CD as part of his debut. Nechifor is also a Romanian representative in the European Youth Parliament (EYP). The EYP is an informal board of young people who discuss various everyday issues, such as political and environmental issues. They also recommend applications that occasionally appear before the European Council to be ratified as laws. In early 2010, Nechifor was proposed and accepted as president for an EYP session.

Nechifor learned the art and science of making the pan flute from the greatest pan flute maker Joeri Murk. Radu has been running its own panpipe work shop since late autumn 2008. He built it with his own strength next to his house and has fosters both, to build and play the pan flute with unprecedented passion.