The Origin of the Panpipe in the Greek Mythology

The name PAN and PANFLUTE stem from the Greek mythology. The following text is from: MYTHOLOGY FROM GREEKS AND ROMANS by Dr.Julius Wolf 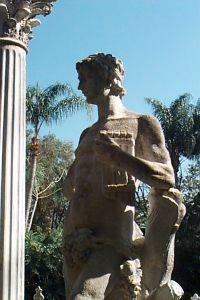 Pan was a mountain and forest demon, who was to pass for guardian for cattle, herdsmen and hunters. He was represented as a bearded man with scrubby hair, goat feet and horns. In day- time he roamed the hills and the valleys with nymphs, at noon he slumbered (Pan’s hour), at night he played in front of his grotto on the shepherd flute, which he had built from seven or nine pipes, which were lined up in size and fastened with a band across.

It is believed, that the sud- den horrific surprise in the deathly silence of a hot summer afternoon (panic) stems from him. The Romans recognized Pan in “Faunas”, the god of fertility, who was known as the guardian for cattle breeding and agriculture.

In MYTHS OF THE CLASSICAL ANTIQUITY, published by Carl Ueberreuter Publishing Company, Gustav Schwab wrote in the first part of

Hermes took a seat next to the guardian Argus and started to play his flute. Argus asked his companion about the origin of this instrument. “I like to tell you this”, Hermes said, “if so late at night you still have enough patience and attention to listen to me. In the snowy mountains of Arcadian once lived a well-known Hama- dryad (tree-nymph), called Syrinx. The gods of the forest and Saturn, enchanted by her beauty, had been fol- lowing her with their courtship, but she knew how to escape them continuously. As she shied the yoke of an engagement and wanted, girded and enjoying hunting like Artemis, stay single like her. Finally, the powerful god Pan met the nymph on his expeditions into the for- est, approached and courted her passionately with his haughtiness.

But the nymph disdained him and fled through impassable prairies until she ended up at the bank of an idle silted river called Ladon, but whose waves were still big enough to prevent the virgin from crossing. Here she conjured her tutelary goddess Artemis, to have mercy upon her and to transform her before she falls into the hands of the god. Meanwhile the god came flying there and embraced the hesitating nymph who was standing at the shore, but how was he surprised, when he suddenly held a reed in his arms; his loud sighs multiplied in the reed and repeated with a low, rustling swish.

The magic from this pleasant sound consoled the deceived god. “Now then, transformed nymph”, he called with grievous joy,” nevertheless should our bond be eternal!”  And now, from his loved reed he cut pipes of different lengths, connected them with wax and from now on he named this lovely sounding flute after the gracious Hamadryad, and ever since this shepherd’s pipe is called syrinx.