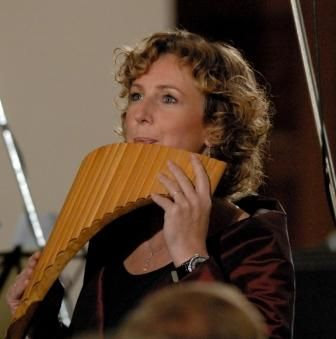 After two years of studying with Damian Luca, Liselotte Rokyta started studying panpipes at the Hilversum Music Academy and the Art Academy. Her teacher was the internationally recognized and Romanian pan flutist Nicolae Pîrvu. She also attended master classes with Gheorghe Zamfir and Simion Stanciu and often traveled to Romania to familiarize herself with the original Romanian style. Liselotte is considered one of the most important non-Romanian panpipe players who mastered the Romanian style.

From 1994 – 1998 Liselotte studied Romanian linguistics at the University of Amsterdam. During her studies she had the opportunity to stay in Maramures (Nod-Romania) for 3 months. This gave her the opportunity to explore the rather unknown form of singing, called Hora cu noduri.

The experience she gained during these three months still inspires her when she plays the pan flute.

Liselotte has worked closely with the Dutch-Canadian organist André Knevel, with whom she performs over 50 concerts a year in Holland, Canada and the United States. In Europe she often gives concerts with the well-known organists Martin Mans (Holand) and Jaroslav Tůma (Czech Republic). Her concerts have taken her to the Czech Republic, Slovakia, Germany, Switzerland and South Africa.

In addition to these activities, the highly talented musician also participates in a panpipe / zymbalon duo with her husband Jan Rokyta. Together they play in a wide variety of styles, from classical to folklore. Highlights of her versatile repertoire are Syrinx and Claire the Lune by Claude Debussy, as well as arranged music by Béla Bartók.

As a performing artist, Liselotte is associated with STH-RECORDS. As a teacher, Liselotte has a lot of experience at the music academy Zwolle, Tilburg and the Bourdon Higher Vocational Education of Music (a music school). This led her to found and run their own music school in 2007. The school also has branches in the Czech Republic and Canada. Liselotte has been teaching classes at the Summer School for Early Music in Prachatice (Czech Republic) since 2002.

In addition to her musical talent, Liselotte is a gifted speaker and moderator at various concerts. Her versatility reveals even more surprises, because she has been a qualified wine expert at the Dutch Academy of Wine since 2008. Together with her husband Jan Rokyta, she organizes unique, musical wine events for companies and individuals. 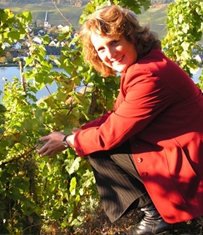 In the program ‘A Musical History of Wine’ she has a solo role as a pan flutist and storyteller. This episode has been successfully performed in the Netherlands for the past 30 years during music and wine events (Rabobank and other companies). In 2009, Liselotte obtained the Advanced Certificate, an internationally recognized diploma for wine training from the British Wine and Spirit Education Trust (WSET).