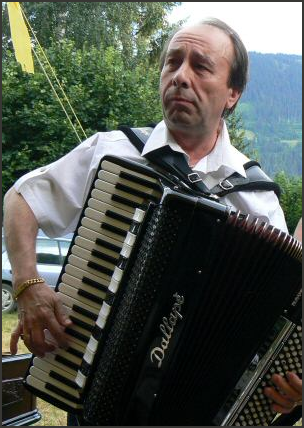 Julian Jantea is of Romanian descent and currently lives in Belgium. He appears in different groups and mainly plays Romanian folklore. But he is a talented master on his instrument in practically all styles, even in Swiss folk music and classical music.

Julian’s appearance is determined, funny and serious at the same time. He knows how to classify himself as a humble, harmonious companion in the group as well as to stand in the foreground with respectable, self-confident solo passages. This attitude makes him very popular and the audience appreciates it to a great extent.

As an instrument, he mainly uses the Italian Dallapé Supermaestro from a family company that has been producing excellent accordions since 1976. With the 15 registers in the right hand and 7 registers in the bass, it meets all musical challenges. The 25 kg (55 lbs) weight of the instrument make challenging demands on the player’s posture.

Julian is part of the Romanian ensemble. Together with Marius Preda, Jon Micu and Zoli Kekenj. He performs every year at the DAJOERI Pan Flute Festival and works as an instructor in the context of co-repetition.