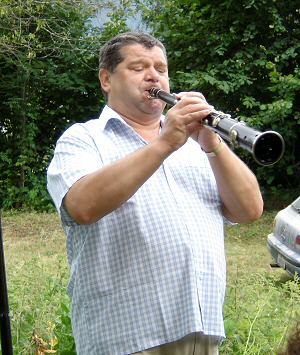 Jon Micu originally comes from Romania, but currently lives in Holland. With his voluminous and very charming voice he has worked on various operas for many years. He is also a talented Taragot player, especially when it comes to Romanian folklore.

The Taragot is a woodwind instrument that originally came from Hungary. It had a double reed with a conical bore and was used as a signal instrument. The similarity to oriental Shepherd’s Chalumeau also explains the name Turkish Pipe, which is still used today.

Today’s Taragot has only one reed and was invented by Vencel József Schunda in Budapest around 1890. The most common form, the soprano instrument in Bb, is about 74 cm (29 inches) long.

Jon Micu masters this instrument with the utmost precision and with emotional expression. He is a member of the Romanian ensemble, together with Marius Preda, Julian Jantea and Zoli Kekenj. With this ensemble he performs every year at the DAJOERI Pan Flute Festival.