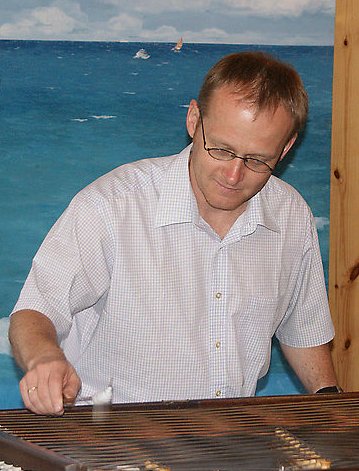 Jan Rokyta Mladší studied the cimbalom with Ludmila Dadáková in Bratislava and played the flute at the Walter van Hauweho and Paul Leenhouts Sweelinck Conservatories in Amsterdam. He started his career with folk music Ostrava, an orchestra founded by his father in 1958. The influence of this period is still visible today. In the field of contemporary classical music, Jan Rokyta Junior worked with the Bratislava Radio Symphony Orchestra. He later gave concerts in Holland with the Schönberg Ensemble, Blazers Ensemble, Het and Het Nieuw Ensemble and the Prometheus Ensemble from Belgium. Recently he was also a respected guest of the symphony and chamber orchestra in Germany, as well as in Austria, with the Austrian Ensemble for New Music and the Radio Symphony Orchestra Stuttgart Südwestrundfunk.

In the world of folklore, Jan Rokyta offers a wealth of experience with the International Dance Theater Orchestra in Amsterdam, where he worked from 1995 – 2002 as an instrumental soloist and music organizer. In collaboration with the Jewish singer Shura Lipovsky in 2004, he was able to participate with honor in the international festival of Jewish music in Krakow, Weimar and Amsterdam.

Jan Rokyta Junior, together with his wife Liselotte Rokyta are longstanding and valued participants in the Arosa Panpipe Festival. Jan plays with the Romanian ensemble and also teaches the cimbalom as part of repetition lessons.