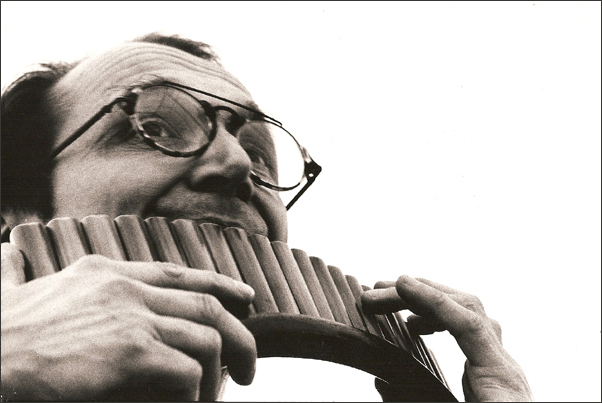 Contact and CV:
Thujastrasse 42, 8038 Zurich,
Phone: 01/482 33 15
Born in 1950, spent his childhood in Eastern Switzerland and youth in Glarus.
He attended the lower and upper seminars in Glarus and Schaffhausen and completed his music studies, which he then completed with the secondary school diploma for double bass in Zurich. As a double bass player, he plays in several orchestras and is a teacher for double bass and pan flute at various music schools.

Pan Flute
Franz Winteler has been playing since 1978. The ability has been acquired without the usual lessons from a teacher. After one and a half years of intensive self-instruction, he ventured to the public with panpipe organ concerts. From the beginning, his programs sounded his own compositions, which were initially strongly based on Romanian folk music. Gradually he broke away. A first piece for pan flute and strings was created. The debut of this concert (in two movements) took place in 1983 with the orchestra school under the direction of Brenton Langbein. A whole series of compositions for this cast followed.

Finally, in 1990 he presented a CD that summarizes this work. Furthermore, he always adopted existing works and transferred them to his instrument. He has already encouraged many composers to write for panpipes.

Double bass:
Franz Winteler completed his music studies with the double bass. In 1969 he started with Jakob Kobelt jun. to learn. In 1973 he joined the Zurich Conservatory and studied with Hans Renidear until he graduated in 1977. He went to Yan Goilav for further training. In the 1980s, F.W. in various professional orchestras. (Winterthur City Orchestra – Zurich Tonhalle – AML Lucerne – St. Gallen City Orchestra)

Ensembles:
Since the end of his music studies, Franz Winteler has been increasingly concerned with other areas of music and making music without notes. The groups he carried were mostly committed to folk music in the broadest sense. For example, Music from Eastern Europe but also played from nearby Appenzell. Gypsy music to swing jazz and always many original compositions were worked out. The groups were named in sequence: Mandala 1978-1980, Räms 1979-1982, Schrumpunti 1981-1985

The current formation of Franz Winteler, which has existed since 1987, is called Barry Vox. A trio with the following musicians and instruments: Roland Schildknecht, dulcimer – Ruedi Hoppler, cello, acoustics and electric guitar. Franz Winteler mainly plays the double bass and pan flute. The experience is expanded to jazz and rock. Barry Vox plays on private occasions, but also for concerts. In 1992 Barry Vox was invited to the Seville World’s Fair. They played in the pavilion for a week.

Educational work:
Franz Winteler gives lessons on various music and middle schools on his two main instruments. He has been the orchestra of the Zurich Oberland Youth Music School since 1986. He supervises other music groups at workshops.