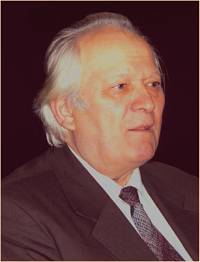 Education:
1933-1939 Primary school in the birthplace of Voinesti, district of Iasi-Romania
1937-1945 Teacher training at the “Vasile Lupu” school in Iasi

1954-1957 further studies in musical composition with Zeno VANCEA in modal polyphony, with Constantin BUGEANU in musical forms, instrumentation and orchestration, with Dimitrie CUCLIN in musical aesthetics and composition. 1973-1974 he studied at the University of Music in Bucharest and received the diploma with the thesis: “Le folklore musical roumain dans la création culte-chorale et dans le spectacle scénique”.

Musical works:
He has produced a large number of musical works for choirs “a capella”, choirs and orchestras of various types, for singers and instrumental soloists with classical and folkloristic instrumental accompaniment in a large number of different styles: song, balade, vocal symphonic poème, musico-ethno choreographic panels, Orchestral suites for folkloric dance, chamber music symphonic and for fanfares, folkloric adaptations.

For the most part, his musical works were and are performed by a large number of choirs at home and abroad with large orchestras and folklore ensembles such as: Bucharest, Suceava, Baia-Mare, Timișoara, Craiova, Tg.Mures, or from Chisinau (Moldavia ) and Novisad (Yugoslavia), as well as in Switzerland, Belgium and Holland. Folklore collections

He traveled all over Romania and collected folk music (doins, balades, songs, melodies from Romanian folk games as well as Hungarian, Serbian and Bulgarian), which he recorded, selected and published. His works have been performed in various concerts at home and abroad (France, Belgium, Holland, England, Germany, Italy, Greece, Yugoslavia, Bulgaria, Russia and other European countries as well as in the USA, Canada, Mexico, Cuba, Japan, Australia etc.) by:
– the national chamber choir. “Madrigal”, conducted by Maître Marin CONSTANTIN
– the children’s choir of Radio Bucharest, conducted by Maître Eugenia VACARESCU – the ensembles “Rapsodia Romana”, “Ciocarlia”, “Doina al Armatei” and “Doina Bucurestiului”
– Orchestra formations conducted by Gheorghe ZAMFIR, Nivolae PÎRVU (NL), Benone DAMIAN
– On behalf of Jöri Murk, he arranged many “Melodias Rumantschas da Tista Murk” (Romanesque melodies by Tista Murk) for the Swiss Appenzeller rich music “Horn Sepp” and “Alpenröösli”.
– For Simion STANCIU Syrinx he wrote 6 arrangements of Romanian folklore and a transcription of the 1st rapsody in A major by George ENESCU for pan flute and chamber orchestra (1998).

As director of orchestras and arranger of musical folklore, he has made many sound recordings with folk music orchestras of the “Radiodiffusion Roumaina” and “Radio Novisad Yugoslavien”.

He made records, cassettes and CDs with folk music in Holland with “Electrorecord”, “Eurostat”, “Jolt KERESTELLY” and with the instrumental formation “Nicolae PÎRVU”.

Current activity:
As a jury member, he participates in many festivals, in national and international artistic competitions.
He is currently active as a member of the “Commission de musique chorale de l’des compositeurs”. He is a member of the “Federation nationale des Ensemble Folklotiques de Roumanie” (A, N.A.F.R.) In the capacity of national adviser and he is the artistic director of the folklore ensemble “Doina” of students in Bucharest.

Since 1995 he has been invited by Jöri MURK to his pan flute seminars at the Music Week Arosa / Switzerland and supports him in his work in promoting and perfecting music lovers of all ages in the art of interpretation on the pan flute. Constantin Arvinte helps to enrich the panpipe repertoire. This includes his musical works, original compositions, arrangements and transcriptions, as well as orchestrations for pan flute accompanied by piano, organ, instrumental groups or chamber orchestra.