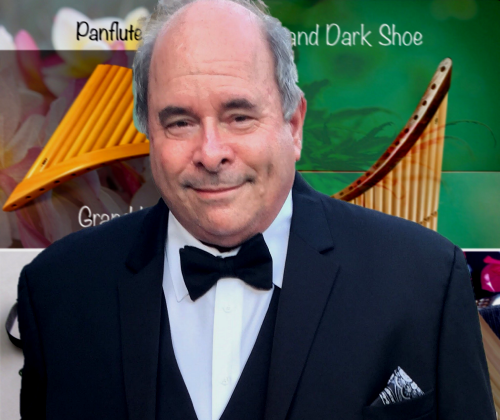 For over 35 years Brad White has been studying, collecting and performing on indigenous wooden flutes such as South American and European panpipes, Renaissance & Baroque woodwinds, Irish pipes and Indian flutes, just to name a few. Brad is always striving to discover and master new instruments. Born in Los Angeles he moved to the Islands of Hawaii in his early adult years. There he became well known for his exotic and virtuoso flute playing, teaching for several years at the University of Hawaii and performing as a featured artist in Hawaii’s world class hotels.

He is a winner of Hawaii’s Grammy Awards and has appeared for dignitaries, senators, ambassadors and heads of state. His music has taken him to the Orient, Europe and throughout the United States and Canada. He has created with his partner Pierre Grill (pianist) such popular Sugo favorites as Isle of Dreams, Voyage and Winter’s Journey. “If I had to say a few words about myself, I would say that I think I bring a fresh, enthusiastic approach to the panflute. I have never tried to copy the sound of another player. I look for my music within and have learned to tap or draw from my emotions and instincts. Though I did not come to this instrument until later in my musical career, I plan to devote the rest of my musical life to it. In America the panflute is almost unknown. pfcom.jpg (14860 bytes) I have a huge goal – I hope to make the panflute, little by little, more available to Americans and especially children through education and with the Internet.

For me, my new Homepage is a first small step.Already in its first month I am quickly approaching 2,000 visitors and several children have written to me about helping them to make their school project about the panflute. They will be the first children in their school to learn about the panflute. I think their classmates will be quite surprised by their reports… Little seeds are planted. I would like to thank Joeri Murk and my first panflute teacher, Costel Puscoiu, for their inspirational work in education and in making the panflute so accessible to others. In my opinion, this is noble work. My panflute albums of original music have become very successful and have been distributed all around the world. That has been a happy surprise. I hope to continue with this work as well.”